Every satellite picture tells a weather story, and today's is no exception.

The image below was the view on Thursday 24th September, with a plenty 'going on' in the atmosphere around the British Isles!

We have low pressure centred over the Irish Sea, plus another low which affected Britain on Wednesday now away over Scandinavia. A tangle of fronts swirls around our low - these are 'occluded fronts', meaning there is essentially only limited change of temperature and humidity across these zones, although they are producing cloud and rain.

This is essentially a 'mature depression', an area of low pressure which is feeding off general instability within an upper level trough - caused by cooler air aloft (see chart at bottom of this blog). This is in contrast to a direct clash of air masses which is the basis for fronts to generate and begin the formation of depressions. 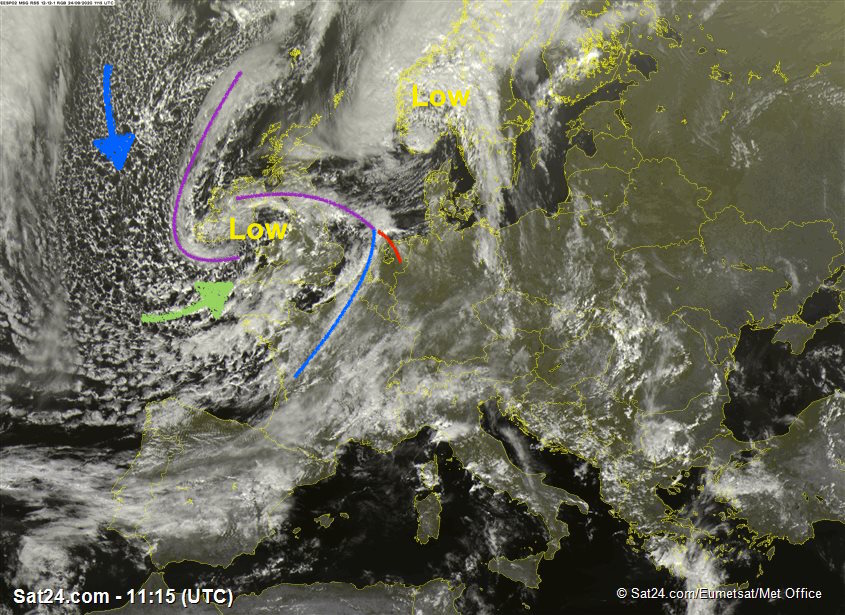 In terms of air masses, it's a classic scene. A cool 'Polar Maritime' air mass is extending out over the north Atlantic from around Greenland on northwesterly winds. This inherently chilly air becomes more unstable as it moves over the relatively warmer ocean waters, allowing convection to occur - rising cells of air, forming the speckled cloud and showers seen to our west.

Then for us, it gets even more 'active', because as this air circulates around the the low over Britain, it approaches us on a southwesterly flow. In so doing, this cool and already unstable air mass has picked up a little more warmth and moisture from the warmer waters near and west of Biscay. This gives it an added 'kick' bringing added instability, and greater moisture loadings - the result being heavier bursts of rain compared to if the air had just come straight towards us from the northwest.

We call this a 'Returning Polar Maritime' air mass because it starts off life over the cool north Atlantic, drifts south of our shores, then comes back to us on southwesterly winds.

Notice how the clouds visually cluster into larger clumps around southwest England and Wales. Where these really band together, they can sometimes be identified on synoptic charts (see below) as surface level 'troughs', indicated by the thick solid lines. This is where local convergence of air is occurring, or there is a signature of a localised zone of colder air aloft. Either way, there's heavy showery rain with isolated thunder mixed in here.

A 'Returning Polar Maritime' is characteristically much different from a 'Tropical Maritime' southwesterly air mass which comes in directly from the subtropics and is essentially 'stable', because it would be inherently warm air moving over a cooler sea. That would instead bring low cloud and drizzle rather than today's heavy showers. However, with fronts attached, it can bring heavy orographic rainfall to our west facing mountains, but that's another story...!

Today's upper air patterns - indicating a notable 'trough' of cold air which currently lies across our part of the world. At around 5km above the surface, temperatures are around -30C, perfectly normal occurrences in these weather patterns! Deep winter troughs can easily produce temperatures of -40C or below at this height.